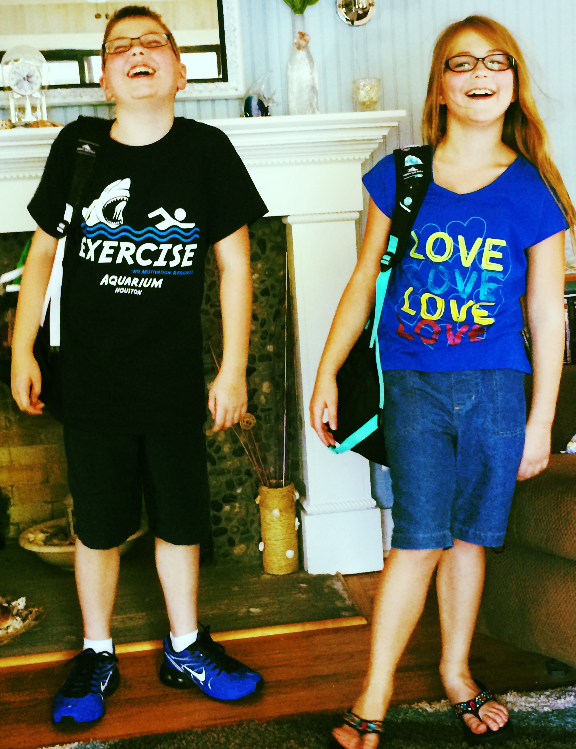 ​
At the beginning of the summer, my 12-year old nephew and 9-year old niece decided that during their summer break, they wanted to try and eat better and exercise. They wanted to be a little smaller and a lot stronger when they went back to school. I can tell you this was music to their fitness crazed Aunnie’s ears!
Over the course of the next several months, they were subjected to quite a bit of running, more burpees than they probably ever want to do again, and a countless number of hop hop squats. We ran relay races, played hot potato with a 15lb medicine ball, and lifted weights. We played kickball, rode bikes and worked on climbing the pole. They also swam with their Hemi (grandmother) every afternoon. We sat down and figured out some nutritious things they would like to eat, and Hemi made sure they got it. They were really determined to make better choices and learn more about what to eat, and what not to eat.
When we started, I took measurements with Body Fat Calipers and a measuring tape. They wanted to be able to see their progress and know that all of their hard work was actually doing something. Initially, according to their Body Fat Percentage, they were both teetering on being considered “Obese”. I don’t like that word, and I don’t like using charts, but it was in black and white, right there in front of me. You can’t imagine my pure joy and admiration for those two when we re-measured a few days before school started. Not only did they pull away from that nearly “obese” category, but they both have moved into the HEALTHY category for their ages! I am so happy and so proud of them! Not only did they lose body fat, but they also gained some nice muscles along the way too!
I know sometimes the thought of trying to “get healthy” or becoming more active seems daunting, but, take a lesson from these two kiddos. They made a decision and spent their entire summer vacation working towards their goals, and THEY DID IT! Not only am I proud of them…they are proud of themselves which is awesome in itself.
When you think you can’t do something, know that you CAN, IF you are willing & determined to put in the hard work to achieve it.
Great job Zach and Cat! We are all so proud of you!